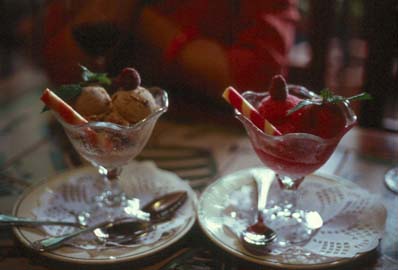 At times it is helpful to alter one's vocabulary and locution a bit when traveling to unfamiliar places.

Several years ago I was car camping around southern Utah with two friends. The landscape is absolutely glorious there, but the food choices are quite a bit more restricted than we city dwellers are used to. As we were driving from Bryce Canyon to Capitol Reef National Park, we saw a billboard for what looked like a Swiss-style restaurant in the next town that we'd be coming to. We figured it at least would make a change from diner fare and burritos.

It was a small town, and we didn't see any Swiss restaurant -- in fact, we didn't see anything at all other than a general store and a DQ-style burger joint. So we went into the general store, bought a few provisions, and went up to pay. The two ladies behind the cash register gave us that "you're not from 'round here, are you?" look - not hostile, but just letting us know whose town it was.

As we paid, I asked about any restaurants in town. They mentioned Billy's Burger Barn, or whatever it was called. I replied that we'd seen it on the way in, but we'd also seen a billboard for a restaurant - "it appeared to have a kind of a Swiss motif". These two ladies snapped their heads around to look at one another in disbelief and blurted out "moah-teef?!" As I stammered incoherently in an attempt to rephrase the statement ("now where did I put that English - Southern Utahan dictionary?"), my two friends were nearly collapsing in hysterics.

As a postscript, we did finally make it known what we were looking for, and the ladies said, "oh, well, we don't recommend THAT place, WE recommend Billy's Burger Barn." At first we figured that Billy must be their cousin, but there was more than a hint of moral umbrage in the tone of their voices. When we went to check out THAT place, it turned out that they served wine and beer.